SMM, the leading international maritime trade fair, is back

After a four-year break from live exhibitions, the maritime community is meeting in Hamburg again from 6 to 9 September 2022. The opening press conference for the flagship fair gave a foretaste of the next four SMM days. Supply chain disruption, alternative propulsion technologies, e-fuels – political and business leaders discussed current challenges facing the shipping industry. Their conclusion: Shipbuilding companies and suppliers are ready for the Maritime Transition – and SMM is about to provide valuable input on how to accomplish it.

Featuring high-profile speakers, today’s SMM press conference marked the kick-off for four intriguing days as the maritime industry meets in Hamburg to share thoughts and knowledge and to network. Bernd Aufderheide, President and CEO, Hamburg Messe und Congress GmbH, was delighted to note that the entire exhibition campus is occupied, and face-to-face interaction is finally possible again. “It fills me with pride that we have been able to win so many top-level representatives of enterprises and institutions and so many accomplished experts for this event, both on the exhibitors’ side and for the accompanying conferences.” The Hamburg Messe CEO had invited top-flight guests to discuss the core theme of this SMM, the Maritime Transition:

Closed-off ports, overstretched supply chains, crew change challenges – Covid-19 kept a tight grip on the world over the past two years. Moderator David Patrician asked Steve Gordon, Managing Director at Clarksons Research, whether Covid had caused the Green Agenda to slip out of the the shipping industry’s focus. “The topic has actually become more prominent,” was Gordon’s reply. He added he was surprised how well the shipping industry had managed the crisis: “The shipping market remained remarkably resilient during Covid.” A look at the global orderbooks reveals that shipyards are fully booked for the next two to three years, he continued. “The share of new orders for ships with alternative propulsion systems is above 40 per cent,” including many newbuilds designed to operate on LNG, he said. While methanol is a big topic, Gordon pointed out, shipowners by and large are still rather hesitant when it comes to e-fuels. “We are just at the start of a huge fuel transition, with a fleet renewal programme that will require massive investment, technology change and innovation,” Gordon said. What is missing, he added, is not money, since “the shipping industry earned well during the pandemic,” but rather the regulatory framework.

No time, no resources
Which alternative fuel should shipowners opt for? So far there is no clear answer. All the International Shipping Organization IMO has provided is the zero-emission target for the year 2100. But the industry itself has higher ambitions. Nevertheless Dr Uwe Lauber doesn’t believe even those ambitions will do. The CEO of MAN Energy Solutions said the maritime transition is technically possible today. “The good news is: Regulatory framework provided, shipping can be green and not emit any more CO2 after 2045.  However this might still not be fast enough to stay in line with the Paris agreement. Industry growth alone will lead to a massive emissions overshoot on our way to 2045, if we do not act now.” That the technology is indeed available can be seen at the MAN ES stand at SMM in Hall A3 where the company showcases an engine capable of running on both, methanol and conventional fuels. For 2024 MAN has announced its first engine designed to run on ammonia.

But what good is all this technology to shipowners if there isn’t enough fuel, asked Lars Robert Pedersen. According to the Vice Secretary General of BIMCO, the lack of sufficient energy resources is a massive problem. “Availability of sustainable energy for the transition is both the question and the answer to decarbonisation of shipping – and all other sectors of society as well. The scale is monumental. While sustainable energy is being scaled up, shipping should not wait but pursue all avenues to improve the efficiency of the fleet,“ Pedersen pointed out, referring to the energy crisis aggravated by the Ukraine war.

Accepting the responsibility
Claudia Müller, the German Federal Maritime Coordinator, promised government support to the maritime sector. “It is Germany’s current top priority to give the industry a sound basis for planning the necessary investments and boost the production of low-carbon and zero-carbon fuels and technologies.” She mentioned the strong increase of global efforts to ramp up the production of renewable energy. There are plans for large solar farms in northern Africa and on the Arab Pensinsula, major offshore and onshore wind power projects in Chile, and Australia is joining the trend with ambitious projects, as well. While international shipping is unlikely to be able to operate without e-fuels, the range of options is wider for short-distance traffic where fuel cells and fully electric propulsion are feasible options. “For shipping and beyond, the question we have to keep asking ourselves is this: Which energy source is best-suited and most efficient for specific applications?”, Müller asked.
But when looking to the future, she said, it is important not to forget the fleet in operation, since ships have a service life of up to 25 years. One of the key opportunities is efficiency enhancements: “There is still room for improvements in shipping,” Müller emphasised.

Hapag-Lloyd is a shipping company that takes specific action today to enhance the environmental performance of its fleet. “Retrofitting programmes are key to this,” said Wolfram Guntermann, Director Regulatory Affairs at Hapag-Lloyd AG. At the world’s fifth-largest container shipping company this means retrofitting highly efficient propellers from the German manufacturer MMG (Mecklenburger Metallguss GmbH). “These propellers will lower both, energy consumption and CO2 emissions by ten to 13per cent,” Guntermann explained. Hapag-Lloyd is investing an amount in the triple-digit million euro range. The company wants to reduce the carbon intensity of its own ships by 30per cent.

This example demonstrates that the shipping industry is on the right path despite many open questions about future fuels. Bernd Aufderheide was confident that SMM will deliver the right impetus for the maritime energy transition: “I am sure that after these four tightly packed days visitors and exhibitors alike will take home plenty of important insights – and return to SMM in 2024.”

SMM was officially opened by its honorary patron, Chancellor Olaf Scholz, in a video message. Scholz underlined the importance of the maritime sector saying: “’That ship has sailed’ (is a phrase) we often use to mark a lost opportunity. But for you as participants at SMM, every ship that leaves port and sets sail is an opportunity. And you have come exactly to the right place to discuss these opportunities,” said Scholz. He also pointed to the important role of shipping in transporting alternative fuels such as methanol and hydrogen. All these topics are highlighted at SMM.

From Tuesday 6 September until Thursday 8 September, SMM opens from 10:00am to 06:00pm daily. On Friday 9 September the fair closes at 04:00pm. Journalists may request accreditation for SMM online here.

About SMM
The leading international maritime trade fair will take place in Hamburg from 6 to 9 September 2022. Around 2,000 exhibitors and more than 40,000 visitors from over 100 countries are expected to attend. In eleven exhibition halls, SMM covers the entire value chain of the maritime industry. As a platform for innovation, it brings together leaders from around the world. The 30th SMM focuses on the maritime energy transition, the digital transformation and climate change. The 2021 SMM was held as an online event due to the COVID pandemic. This year, the maritime community will once again gather live on the exhibition campus and in conferences featuring top-ranking panellists. SMM 2022 is held under the patronage of German chancellor Olaf Scholz. 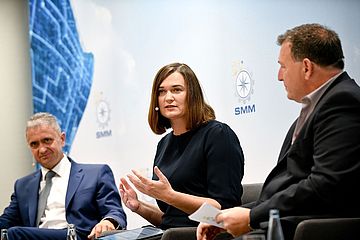