SMM: Always One Brilliant Idea Ahead

Whether it is about digital or green innovations, SMM is the perfect stage. From 06 to 09 September 2022, it will be the meeting place for representatives of shipping companies, suppliers, shipyards and scientists to share views and ideas, expand their networks and do business. Again and again, the leading international maritime trade fair has reinvented itself, often inspired by its visionary exhibitors.

“Ellen” has set a new world record, travelling as much as 92 kilometres on a single battery charge. "This is the longest distance an electric ferry capable of carrying both passengers and vehicles has travelled anywhere in the world," says Henrik Hagbarth Mikkelsen, Senior Lecturer at Marstal Naval Academy, who was involved in the development of the ferry. The drivetrains and propulsion engines were supplied by the Danish company Danfoss, while the two fixed-pitch propellers were made by Piening Propeller. The battery packs – the world's largest, with a capacity of 4.3 MWh – were provided by the Swiss battery specialist Leclanché. These are just three of the roughly 2000 international exhibitors represented at SMM where the industry's Who's Who will gather from 6 to 9 September.

Plenty of space for interaction

This will be the 30th edition of the leading international maritime trade fair, an event which keeps reinventing itself: "This year we will be offering even more opportunities for networking, and a wider selection of free content. For the first time SMM participants will be able to present their knowledge or product novelties on so-called Transition Stages," says Claus Ulrich Selbach, Business Unit Director – Maritime and Technology Fairs & Exhibitions at Hamburg Messe und Congress. The themes these stages highlight reflect the SMM motto “Driving The Maritime Transition”: One stage will be dedicated to alternative propulsion systems, environmental technologies and sustainability, another one will focus on automation, digitalisation and data management. The third stage will address interior design, outfitting and technologies for passenger ships as well as challenges and opportunities facing the cruise industry. "Following the speeches and presentations, our new networking format 'It's wine o'clock' will provide a relaxed environment for exhibitors and visitors to share thoughts and views,” Selbach adds.

This is exactly what makes SMM special, believes Knut Ørbeck-Nilssen, CEO Maritime at DNV: “It is a place to inspire and be inspired, coming face-to-face with the individuals, technologies and services that will write the next chapters in the story of how we conduct responsible commercial activity within the ocean environment.”

Hapag-Lloyd is a company that is constantly looking for new inspiration and more sustainable solutions. „For us, SMM is the ideal platform to get a complete overview of the latest technical innovations and to meet important suppliers from all over the world”, says Richard von Berlepsch, Managing Director Fleet Management. The world's fifth-largest liner company enjoys a reputation as green pioneer. For example, Hapag-Lloyd was one of the early movers in installing scrubbers and converting ships to liquefied natural gas (LNG). Their latest innovation: Sensors fitted to containers. In a global first, the Hamburg-based shipping company is installing transponders on its entire fleet of containers to allow early detection of supply chain disruptions. "We anticipate being the only ones doing so for at least one year," says Hapag Lloyd CEO Olaf Habert. During the Maritime Future Summit on 5 September, Chief Information Officer (CIO) Donya-Florence Amer will introduce the SMM community to the company's digital strategy.

Automation is the focus of Rolls-Royce’s digitalisation efforts. The leading maritime technology company has developed a new ship automation portfolio. "We are the world's only supplier of ship propulsion systems to offer an electronic platform for monitoring and controlling the entire ship – our mtu NautIQ," says Denise Kurtulus, Vice President Global Marine at Rolls Royce PowerSystems. "This platform makes system integration much easier for our customers." The German Navy relies on this innovative technology: Damen Naval will install it in the new F126 frigates.

Rolls-Royce has been one of SMM's most faithful exhibitors. But apart from well-established market leaders, SMM also attracts start-ups, such as OneWeb, one of this year's s first-time exhibitors. The British communications infrastructure company focuses on enhancing the network integration of ships by improving satellite connectivity. "SMM really attracts a very wide spectrum of companies from all segments of the maritime market, and we are looking forward to making contact with partners and customers during the event," says Carole Plessy, Head of Maritime at OneWeb. 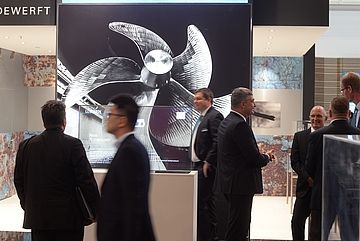