Towards climate-neutral shipping: The green revolution

In September the maritime sector will gather for SMM 2022 to discuss key industry topics. The all-important question is: How can shipping achieve climate-neutrality rapidly? The leading international maritime trade fair combines the know-how of experts from science, shipping, shipbuilding and the supply industry.

For decades humanity has been emitting more CO2 and other greenhouse gases than the world’s oceans can absorb. As a result, the oceans are heating up and becoming more acidic. Ecosystems are in danger – and we are losing the very basis of our survival. “Our mission to protect the ocean needs to be as big as our shared responsibility. Europe can make a huge contribution, as a maritime power. But only together can we step up protection and let our oceans teem with life again,” said EU Commission President Ursula von der Leyen at the “One Ocean Summit”.

Ocean shipping bears a significant share of the responsibility for our climate: The world fleet, an estimated 60,000 vessels carrying 90 per cent of the global trade volume, generate more than two per cent of global CO2 emissions. The International Maritime Organisation (IMO) aims to achieve climate-neutral operations by the year 2100. The sector itself is more ambitious: The shipping industry wants to be carbon-neutral by 2050. SMM helps achieve this goal: From 6 to 9 September 2022 the maritime community will meet in Hamburg. Participants from around the world will be able to learn more about new trends and innovations, especially in the fields of climate protection and alternative propulsion technologies. At gmec, the global maritime environmental congress, industry leaders on five discussion panels will share insights. Among them will be the German Federal Maritime Coordinator, Claudia Müller (Green Party). Her plea: “Shipping must get cleaner!”

The current debate revolves around the potential of alternative fuels, said Claus Ulrich Selbach, Business Unit Director – Maritime and Technology Fairs & Exhibitions at Hamburg Messe und Congress (HMC). “What innovations are available in this segment, and what is the current state of research? Industry stakeholders will be able to get up-to-date information on these questions at the gmec conference, at the exhibition stands and, for the first time, at the “Transition Stages” where suppliers will present their concepts and visions,” added Selbach.

Batteries alone cannot resolve the energy problem, Uwe Lauber, CEO of MAN Energy Solutions SE, points out: “To power a large container ship electrically you would need a battery the size of the vessel itself. The owner would be unable to carry any containers. And the ship would be too heavy to float, and sink.” There is no way to avoid combustion engines, he adds. But the good news is: The industry can build engines capable of burning emission-free fuels today, said Lauber.

The IMO supports these efforts of the supply sector: “Without a doubt,” said IMO Secretary General Kitack Lim, “achieving decarbonisation ambitions in the shipping sector will rely on a smooth transition to alternative low- and zero-carbon marine fuels.” The IMO is working on creating a global legal framework to accelerate this process, he stressed. Lim will be personally present as a speaker at the gmec in September.

As the global orderbooks reveal,  only one in nine ships currently on order will be equipped with a propulsion system capable of running on alternative fuel. The classification society DNV does not expect the fuel environment to change fundamentally until the pivotal year 2050. Methanol, ammonia and hydrogen are favoured solutions. But nobody knows which fuel will ultimately dominate. A challenging situation, especially for early movers. “The fuel question is the most difficult and most important decision our customers will have to make this decade,” said Torgeir Sterri, DNV Senior Vice President. “This is why we have created class notations and guidelines that give them the flexibility to find the path that fits their operations and business.”

Meanwhile, there is much the shipping sector can learn from other modes of transport, says Elisabeth Munck af Rosenschöld, Global Sustainability Manager at IKEA. The Swedish furniture giant began chartering vessels last year. At gmec Rosenschöld will explain the background of this maritime investment.

It is about the money

Answering the fuel question not only takes courage but also money – lots of it. Klaus Schmidberger from KfW Bank will look at the topic from the perspective of an economist. He stresses that the required investments are enormous and that what the affected stakeholders need more than anything is a sound basis for planning – “sooner rather than later”. A typical cargo ship has a lifespan of 20 to 25 years, he says. Owners who want to be climate-neutral by 2050 need to invest today.

The costs are just one side of the coin, he points out; the other is the responsibility to stop climate change. "Is the industry doing enough to decarbonise?" A question which will be at issue when experts such as Sönke Diesener from the environmental organization Nabu meet up with industry leaders like BIMCO CEO Lars Robert Pedersen. And there are many other issues which merit discussion: For example, can AIDA Cruises communications chief Hansjörg Kunze imagine installing hydrogen fuel cells on board cruise ships? And how would Thomas Wiese, Director Strategy & Innovation at Siemens Energy Marine, implement such a concept? These are just two of the many questions to be addressed at gmec. This panel discussion will be open to the general public. Tickets are available at 25 euros. The specialist conference will take place on 7 September 2022 during SMM.

The entire gmec programme can be found on the SMM homepage as of today. The partner for the conference is Seatrade Maritime, and the event is sponsored by the US ship classification society ABS. 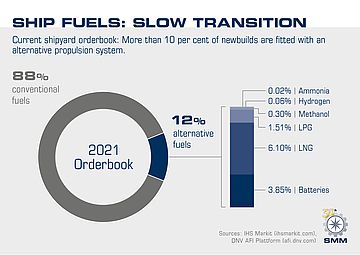